The next task, after introducing the sun, was dealing with the sky.

So far, our sky has been left a dull solid color. It would be trivial to make the sky sphere shader change the color of the sky, but it needed to correspond with the sun position in the sky, as seen by the player.

There are several good solutions posted on the web. All attempt to simulate atmospherical scattering. However, most of those methods include heavy calculations, that are perhaps not best suited for a real-time sky. Figuring we would need something simpler, I decided to tackle the problem on my own.

The solution involves simply drawing a sphere around the player, and rendering the sky on that. Since the sky can be thought of as a incredibly large sphere that's far away, this approach suited us. And since we have no plans to allow the player to leave the planet, it is unnecessary to simulate an atmosphere from outside the atmosphere. 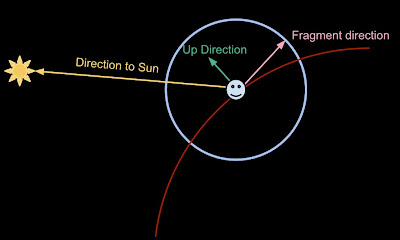 This image (which is not to scale) shows the rough idea of how we draw the sky - it is drawn on the tiny sphere (the light blue circle in the diagram) that surrounds the player everywhere he goes.
The three main things that determine the color of the sky are the direction to the sun, the 'up' direction (used for horizon calcuations), and the direction to the voxel being drawn.

Given these three vectors in the fragment shader, we can compute the three dot products between them - dotSunUp, dotSunFrag, dotFragUp. These dot products yield a normalized value in the [-1,1] range, and give us enough information about how to draw the sky.

1. if dotSunUp > TransitionConstant
In this case the sun is high up in the sky, so the entire sky can be drawn blue. It's also possible to lighten the near-horizon fragments, for a more realistic look. This lightening is done by using the dotFragUp value - which determines how close to the up direction (And the horizon) a fragment is.

2. if dotSunUp > NightTransitionConstant
In this case we are in a sunrise or sunset phase. The sky color is blended between a day and night color, depending on the dotSunUp value. Here we also start to add a glow that surrounds the sun. This glow is calculated using the dotSunFragment value, which determines how close to the direction of the sun a fragment is.

Variation of color of the near-horizon fragments can be used to also change their color to increase realism.

3. All other cases
In this case we are in nighttime. The sky color is simply set to the night time color, again with possible variation to the near-horizon fragments.

The two constant mentioned above can be set to different values to increase the transition between night and day, as well as change the time that the glow persists after the sun has gone  below the horizon. (Note that a dotSunUp value < 0 means the sun is below the horizon, while the NightTransitionConstant can be set to negative values - in the current setting it's -0.2

Finally after all these checks are done, an additional check can be performed using dotSunFrag, to see if the fragment drawn is actually really close to the sun's position - in which case the fragment is actually a part of the sun's disk. A similar method is used to set the sun's glow.

Finally, here's a short video of the sunrise and sunset on the planet. There's still some tweaking to be done on the colors, as well as the mentioned near-horizon color changes. Considering the fragment shader is based entirely on dot products and linear interpolation (both very fast on a GPU) - the results are very satisfactory for a real time implementation.